Atticus O'Sullivan is the main protagonist and narrator of The Iron Druid Chronicles. He was born in Ireland in 83 BCE. He was introduced in the novel Hounded, and has appeared in its sequels Hexed, Hammered, Tricked, Trapped and Hunted. He also starred in the short story Clan Rathskeller.

Atticus O'Sullivan, whose real name is Siodhachan O Suileabhain, is a 2100-year-old Irish Druid, the last of his kind. His defining physical characteristics are his fiery red hair, and strong physical presence, and the similar build as a very, very fit 21 year old. His main trait that identifies him are a series of connected tattoos running up his arm and down his right side, down to his right foot. These tattoos connect him to the earth, and are the conduits of his power.

Living over 2000 years has made Atticus cynical, stoic, world-weary, and very used to being alone. He has lived through the Roman Empire, Invasion of the Huns, Persecution of Christians before and after the reformation, the discovery of the New World, and both World Wars. He has lived all over the world, and finally settled in Tempe, Arizona because it is a two hour drive from the nearest trees that allow Faeries to enter this plane.

Throughout the series, Atticus is faced by various mythological and human enemies, and continues to live through a mix of paranoia, cunning, layers of planning and sometimes the help of others.

One of Atticus' few weakness is his lust. In several instances in the series he has completely lost his normally cool composure when in the presence of women he finds attractive.

Atticus's primary magic stems from his magical Druidic training, which has certain advantages, limitations, and restrictions. The bulk of Atticus' powers are not stored in his physical body, but granted to him by the Earth itself. He draws power from the Earth through his tattoos when he is physically in contact with the ground. While this gives him access to near-limitless supply of power, it puts him at a major disadvantage when in areas that are paved over or he is otherwise off the ground. He can, however, store a limited amount of power in his Bear charm, which acts as a small magic battery.

Atticus's magical abilities are described by him as variations on "Binding" and "Unbinding" of organic matter, including both living cells (such as those of a human body) and natural substances such as natural fiber clothing, roots, dirt, wood, and stone. This process can create or break mental or physical connections between these things, as well as alter them at the cellular (or even molecular) level to change them. This allows him to accomplish such feats as forming a telepathic bond with another creature, changing the properties of herbs to achieve specific effects, cause physical objects to attract each other or even fuse, break the bonds within substances so they fall apart, and altering his own body in a variety of ways including healing wounds, shapeshifting, and enhancing his eyesight, strength, and speed. Atticus also has the ability to travel between realms by binding and unbinding himself to the plane.

Druidic magic cannot directly harm a living being, or the spell will kill the druid on the spot. However, the rules of druid magic do not prohibit indirect harm. So, while Atticus cannot just stop an enemy's heart with magic, he can increase his own strength to cut an enemy's head off with a sword or use a compound bow with a draw-weight far beyond human capability. A similar loop-hole is that he can bind human cells so long as he is not causing harm, such giving someone a wedgy by binding their underwear to their back, or causing one person to slap another by temporarily binding one's hand to the other's face. In Hammered, Atticus reveals that "living being" does not including vampires or other undead, which means that druids can unbind vampires' bodies on sight, causing them melt into it a puddle of gore.

Whenever Atticus is severely hurt, he can maximize his healing process by lying on bare earth on his right side, so the full extent of his strip of tattoos are touching the ground. In the events of Hounded, he received a trinity tattoo from Brighid that calls forth Cold Fire that can destroy all demons in his presence that are touching the earth. However using it leaves him extremely drained to the point he can barely stand after using this.

He's also an accomplished herbologist. Atticus maintains his youth through the continued use of what he calls "Immortali-tea", which he also feeds to his Irish Wolfhound, Oberon, and to his apprentice, Granuaile. While working at Third Eye Books and Herbs his main sellers were "Mobili-Tea" and "Vitali-Tea", aimed to the aging Tempe population. In addition to being effectively immortal, he has also struck a bargain with the Celtic chooser of the slain, The Morrigan - teaches her the magic behind his amulet, she will never actually choose him to be slain in battle. He still has to be wary, because it doesn't mean other harbinger gods can't take him to their afterlives.

This sequel carries the aftermath of Atticus defeating a god and keeping the Fragarach sword. Atticus now takes on a druid apprentice and has to contend with the backlashes of the fight. Two Celtic goddesses are vying for his knowledge, affection, and allegiances. He must also contend with the supernatural turf wars that spring up now around town. In particular, two witch covens that are hell bent on destroying each other and anybody in their way.

One survival strategy has worked for Atticus for more than two thousand years: stay away from the guy with the lightning bolts. But things are heating up in Atticus’s home base of Tempe, Arizona. There’s a vampire turf war brewing, and Russian demon hunters who call themselves the Hammers of God are running rampant. Despite multiple warnings and portents of dire consequences, Atticus and Leif journey to the Norse plain of Asgard, where they team up with a werewolf, a sorcerer, and an army of frost giants for an epic showdown against vicious Valkyries, angry gods, and the hammer-wielding Thunder Thug himself.

The assault on Asgard has left Atticus on the hit list of half a dozen thunder gods and put him on the radar of every god who's job description doesn't come with 'unkillable'. He teams up with Coyote to fake his death and find some manner of peace to train his new apprentice. But the trickster god has a job for Atticus in the desert reservation, and its a bit more deadly than it seems.

After over a decade of relative peace, Granuaile is ready to be bound to the Earth and become a Druid. But the world knows that the iron druid still lives - and some portions have decided to correct that.

The Greco-Roman pantheons are hot on Atticus trail, Loki is crazy and murderous, the vampires have hitmen out and about, and the Dark Elves are feeling like killing some druids. Atticus is going to be doing a lot of running away. 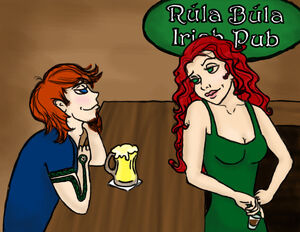 Atticus and Granuaile by 13Stellar 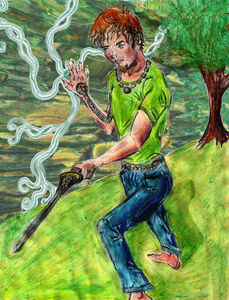 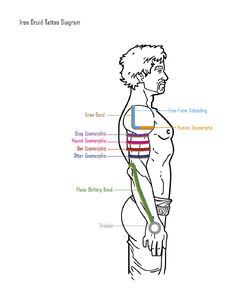 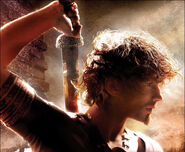 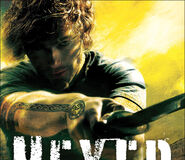 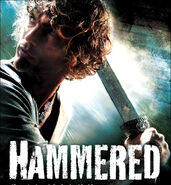 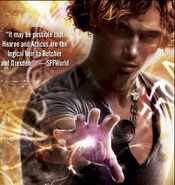 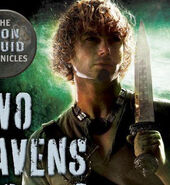 Atticus in Two Ravens and one Crow 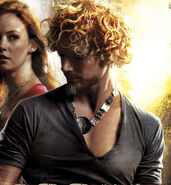 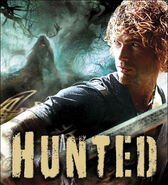 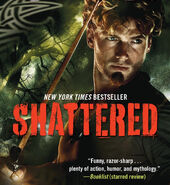 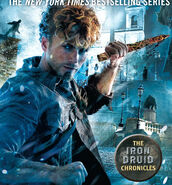 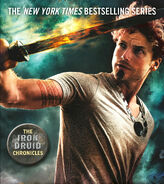 Atticus in Scourged
Community content is available under CC-BY-SA unless otherwise noted.
Advertisement