Start a Wiki
Granuaile (pronounced GRAWN ya wale) MacTiernan is Atticus O'Sullivan's Druid initiate and one of the main characters of The Iron Druid Chronicles. She is introduced in the first book, Hounded, as a flame-haired bartender at the Rúla Búla Irish pub that Atticus finds alluring and mysterious.

It is revealed over the course of the first book that Granuaile is a young Irish American woman possessed by a 700+ year old Indian witch named Laksha Kulasekaran. At the beginning of the second book, Hexed, Laksha has left Granuaile's body and taken over another host.

Granuaile is often more than she appears, and proves more than capable of keeping up with Atticus, no matter what trouble he gets into. After proving her worth on several adventures, she agrees to train to become a Druid, and Atticus agrees to train her.

Being the last Druid, mostly because all his brethren were hunted down and killed, Atticus is initially reluctant to train Granuaile. He finally agrees after many conversations, and having successfully survived a number of troublesome situations testing her resolve, which proves that she is serious. Though it is clear that they are thoroughly in love, Atticus struggles for some time to keep her training strictly business, out of tradition, and a desire to not mess things up.

Between the novels Tricked and Trapped, 12 years elapse in which Granuaile undergoes intense training in Druidry and martial arts, learning multiple languages, how to fight with a quarterstaff and throw knives.  Atticus provides her with his Immortali-Tea which stops her from aging. During the events of Trapped, Atticus carries out her ritual tattooing to bind her to the earth, which allows her to use magic. The process is slow and painful, being done with a thorn from a living bush and taking three months to complete. Her four shape-shifting animals are a horse, a black jaguar, a peregrine falcon, and a sea lion.

During the course of her training, Granuaile had several arguments about the nature of her relationship to Atticus, clearly seeing they are attracted to one another but Atticus refusing to act on it for ethical reasons, since he is her teacher and in a position of authority over her.  When her tattooing is completed, they both look at each other in the magical spectrum and see knot-work that indicates not only lust, but love. Now free of their teacher-student obligations, they finally consummate, copulating for 3 whole days due to their Druidic magic replenishing their stamina.

Prior to the completion of her tattoos, Atticus arranged for a special weapon to be made for her by the brothers Goibniu and Luchta: Scáthmhaide, an enchanted quarterstaff that can kill many types of threats and turn her invisible.

During her binding, she and Atticus are hunting by Bacchus, Roman God of Wine, and trapped in the Olympus Region of Europe by Pan and Faunis who are disrupting the tethers to the Irish Plains. After trapping some Dyrads on a Time Island, the tethers are restored and they are able to finish her Bindings in the Green Man's retreat in France that Atticus found during WWII. Her bindings let her take the form of a Black Jaguar, a Chestnut Mare, Peregrine Falcone, and a Sea Lion.

After her binding was compete, and the forementioned love-making, she and Atticus are forced to help the Norse deal a blow against Hell and Loki. They join Freya and head to Niffelheim where they fight and defeat Fenrir. They take a short break in Mexico and head to do a world tour introducing her to the Earth Elementals.

During their tour they are attacked by Athena and Diana, the Greek and Roman Goddess of the Hunt, and defended by The Morigan. Granuaile and Atticus flee while Morigan fends off the huntresses and finally chooses to lose to them. 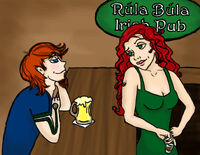 Atticus and Granuaile by 13Stellar
Add a photo to this gallery
Retrieved from "https://theirondruidchronicles.fandom.com/wiki/Granuaile?oldid=4824"
Community content is available under CC-BY-SA unless otherwise noted.