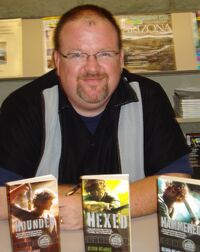 Kevin Hearne is the author of The Iron Druid Chronicles, a series of urban fantasy novels set in present day Tempe, Arizona. The series follows Atticus O'Sullivan, the last of the Druids, as he deals with angry gods from multiple pantheons, vengeful witches, werewolves, and vampires.

Aside from the Iron Chronicles series, Hearne is also working on a short novella called “Two Ravens and One Crow” for IDC.

Retrieved from "https://theirondruidchronicles.fandom.com/wiki/Kevin_Hearne?oldid=4574"
Community content is available under CC-BY-SA unless otherwise noted.