Oberon is an Irish Wolfhound and Atticus O'Sullivan's most loyal companion in The Iron Druid Chronicles. He appears in every book and the two communicate telepathically with each other.

Oberon was found by Atticus at a dog rescue facility. Oberon had had trouble being re-homed, due to behavioral issues. Atticus has said that all Oberon needed was someone to understand him. He requires long stories to stay still during baths, and the ability to hunt occasionally to burn off steam - and Atticus will hunt alongside him while shapeshifted into a hound.

Oberon usually stays home while Atticus is working at Third Eye Books and Herbs... and tends to watch a lot of television (lots of Oprah, and the History Channel). Oberon's telepathic dialogue with Atticus is the large percentage of the comic relief of the book series. He is also very passionate about breakfast meats.

Once being bound to Atticus, Oberon has learned the English language, although the only people he can converse with are Atticus, Flidais, Brighid, and Coyote. However, he doesn't have a complete grasp of all the nuances of the English language - for example, he believes Sir Francis Bacon is the creator of bacon.

Being a wolfhound, Oberon is able to be controlled by deities who can control animals, such as the hunting goddess, Flidais. He does contribute to the action in the books, being able to smell out the undead, hear those invisible to the naked eye, and perfectly willing to hamstring enemies.

In Hexed he is revealed to be approximately 15 years old, more than double the normal life-expediency of an Irish Wolfhound, who normally live to age 6-7. This is the result of Atticus secretly feeding him an herbal blend found in his "Immortali-Tea," the same used by Atticus himself to prolong his own life. Oberon is physically still 3 years old and in the prime of health.

Oberon's dialogue suggests he possesses a human level of intelligence and reasoning(AKA sapience), even if his drives and interests are still very canine. It is never explained why this is, but may be an added effect of the Immortali-Tea.

Oberon has his own twitter account (operated by Hearne), where he posts fairly regularly with humorous quips and sometimes news about Hearne's last activities.. 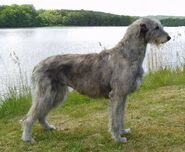 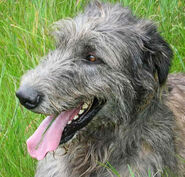 Add a photo to this gallery
Retrieved from "https://theirondruidchronicles.fandom.com/wiki/Oberon?oldid=4825"
Community content is available under CC-BY-SA unless otherwise noted.